"Minnesota Nice" in a nutshell.

A behind-the-scenes reenactment of the photo shoot.

But it’s not like U.S. media outlets have never featured crappy politician pictures on their covers. Check out this New York Post cover about Charles Rangel, the U.S. Representative from New York:

And the mainstream librul meedya said, "THAT'S RACIST! IT DEPICTS AFRICAN-AMERICANS AS LAZY!" Just kidding, liberals are too chickenshit to play that card these days.

We at This Blog Rules feel that the Psycho Bachmann Newsweek cover is just a hilariously shitty picture of a political candidate. In fact, we think there should be more shitty photographs of politicians.

In the spirit of kicking these people while they’re up, we present to you, in alphabetical order by first name (just to prove our political neutrality) a wide range of unflattering photographs of United States politicians — and of course their family members, because they matter, for reasons unknown to political philosophers…

Note: Scroll down for bonus sections “Pictures of Politicians Eating Hot Dogs and Corn Dogs” and “The French and English.”

"Yes, I can see why you think what you're saying is sooo fascinating. I'm in shock."

Groundhog Day 2007: The little guy emerged from his hole and put his paws on the dais. Did he see his shadow? We don't know, but he's kind of adorable.

We realize it's a low blow to include bad photos of Hillary Clinton, as there seem to be just so...fucking...many of them. But we never said we were against low blows.

In the wild, the Laughing Biden hunts its prey by throwing a makeshift "baby catcher" upon his intended victim. If successful, he will take it home to show his mate, who will reward him with ass.

A screenshot of McCain's audition video for the role of the boss in Office Space. "I'm gonna have you go ahead and assemble Congress on Saaaturday..." 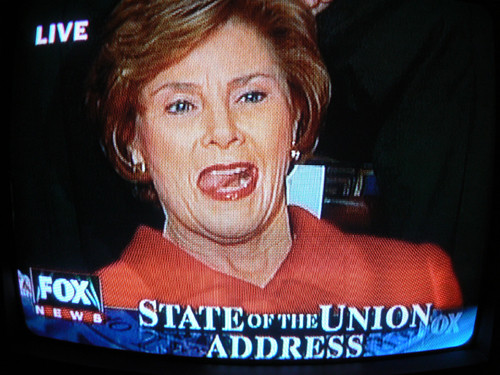 What is it with politicians and tongues? They can't seem to keep the meaty little things inside.

The classic Michelle Obama shitty picture. Everyone's seen it. If you haven't, well now you have.

"I put a poopie over there."

You've probably never heard of this guy. It's a pro-life Democrat who is running against Obama in the primary. Shown here doing his Frankenstein-as-Hamlet impression.

"Whooo! Yeeeah! I am the fuckin' governor of Texas! I hope this is obvious!"

"Oh, that's a whole lotta hooey. Get off my lawn."

Bonus Section: The French and English

In closing, we hope these gathered photographs will inspire the media to depict more of these people in a more, shall we say, humble light.

Author Will Conley wants to ruin your life. (And doesn’t trust you to ruin it yourself).

Daughter, sister, wife, mother and writer. I spend half of my free time writing and the other half reading contemporary literature. I like to start my day with half an hour of yoga and then I head over to my desk with a cup of green tea to start working on my sci fi novel. On weekends I like to head over to the country side for a breath of fresh air and to catch up with my mom.