Drones are the hottest gadget of the moment, and if you’ve got the cash then they’re one of the most worthwhile purchases you’ll ever make. There are drones for beginners, drones for filmmakers, and even drones to take selfies, so you’ve got plenty of quadcopters to choose from. We’ve found the best drones on the market at the moment with top rated reviews, meaning less time choosing and more time having fun with your new gadget.

Drones have transformed in recent years from an obscure hobby that only the insanely wealthy could afford to a semi-affordable gadget that everyday people are using. These little quadcopters can fly around with your direction, but they’re so much more than the old remote control helicopter you used to own.

Buying a drone is something that’s now achievable for most people and as the technology becomes more accessible people are wondering which the best drones are. There are now drones available in all shapes and sizes, for different purposes, and of varying configurations, so it’s fair to say shopping for one can be confusing.

If you’re one of those lucky people on the hunt for a drone, you’re in luck. This guide will point you towards the top performing and best selling drones around with plenty of real-life users who can back up their worth. Whether you just want to have fun with it or want to put it to work for you, you’ll have some great options here to choose from.

What Can A Drone Do?

Some people purchase drones without having any clue what they’ll do with them, and that can be half the fun. Although they’ll deliver hours of entertainment, they can also be quite useful. Here are some features you might find on a drone and what it can do for you.

Having a GPS function allows you to find your drone or it to find you so that it doesn’t get lost.

These drones have a camera attached, and some allow you to watch in first person view or real-time as the footage is happening.

Sometimes flying the drone off the ground can be challenging, and an auto takeoff function makes this job easier.

There are two main options: built-in batteries that can be recharged or replacement batteries. Each option has its pros and cons to be considered.

The sensors that a drone uses will impact how smooth and stable it is, with the more expensive brands usually having better acceleration and control.

Most drones have the ability to be synced up with your smartphone and controlled via this device.

The Average Cost Of A Drone

Since drones are relatively new in the recreational sense, you have to be prepared to pay a pretty penny for them. When they were first released, drones were thousands of dollars, and rightly so. However, with the technology now being more readily available, the average cost for one of these machines is $700 with quality affordable ones as low as $500.

There are some cheaper drones on the market and it can be pretty tempting to try one out. However, you’ll likely only be burned with poor quality, as this is a serious gadget that shouldn’t be made cheaply. Only invest what you can afford obviously, but it’s better to wait until you can get something that’s been well made rather than get a cheap drone that won’t last long at all.

The Best Drones On The Market

There’s no doubt the drone market is growing, so we’re lucky enough today to have quite a wide selection to choose from that won’t break the bank. We’ve found the highest reviewed drones and the best ones to meet all budgets so that you can start having fun with your new favorite gadget and skip the lengthy search.

The first of a few DJI drones to make our list, as the brand is fast establishing itself as a leader in this industry. The Phantom 4 is a drone that everyone can use, and with a price tag of around $750, it’s one that most people can afford with a little bit of saving.

The DJI Phantom 4 is extremely easy to fly so it’s great for beginners. Everyone will notice quickly just how stable it is which means less crashing and more fun. It’s got some great safety features that will ensure your investment is protected, including the return to home mode that will bring it back to you even when you’re unable to control it.

Some downfalls include the price, as it’s made mainly for consumers so a little costly, and you’ll need a third party app just to do proper mission planning. Aside from these, this drone ticks all of the boxes. It has auto fly modes, 4K video capture, and a 20mm wide angle lens so you're able to get a pretty good picture with it.

One of the coolest things about this drone is how you can watch the Live View as the action is happening; a feature usually reserved for more expensive ones. It has ultra smooth video capture which means stability and a great picture, so for the price, it would even suit film professionals as well.

When money is no object, you shouldn’t have any problems dropping a few thousand dollars on a drone. That’s where the DJI Inspire 2 comes in, and we see another serious entrance from this renowned drone manufacturer on our list. This is made for professional use but there would be nothing stopping you getting it for recreational use, as long as you can afford the near $3,000 price tag.

The Inspire 2 is made with a magnesium alloy body which means it’s tough but lightweight. You’ll get a serious 5.2K video quality which is pretty unheard of in a drone and it comes with CinemaDNG and ProRes recording. This works for all kinds of action, and it has a high-speed sports mode to get the really fast movers. It’s dual operative, you’ll get an FPV mode to see all of the action, and it can detect and avoid objects without your help.

Sadly, when you spend this much on a drone you don’t want to know about the negatives but there are a couple. If the price wasn't enough to put you off, you’ll also need an expensive high-performance computer just to be able to edit the videos. There’s a bug in the Adobe Premier that also hampers the workings of the CinemaDG, so we’re hoping this is fixed sooner rather than later.

When you’re looking for a drone to show you exactly what all the fuss is about but don’t have an enormous budget to throw around, the Parrot Bebop 2 is a cool solution. This drone retails for around $600 which is a great entry level price, but it’s built a lot tougher than the cheap options on the market.

This is a small little drone but it gets the job done, and comes with features that only more expensive models have like FPV mode. You’ll need to wear the included goggles to get to witness it, but they don’t cost any extra and it gives it a pretty cool high tech feel to the whole experience.  This drone is capable of doing flips and rolls mid-air, which means you can spend hours perfecting your flying skills in a very cool way.

The Parrot Bebop 2 is fun to use, but don’t go expecting to fly long distances with it or it will let you down. You’ll get around 19 minutes of fly time with its rechargeable batteries which isn’t too bad, but the signal will only let you keep it in the backyard or park. The video quality is average but it’s not been made for cinematographer so most household users will be thrilled, and when looking at the price you really can’t go wrong.

We know that we warned you against getting the super cheap drones, but if you were going to go down that path we’d rather you have the best of the bunch. The Ryze Tello costs around $100 and it will give you the full drone experience just without any of the high-tech stuff attached. This drone flies smoothly and easily and is the perfect entry-level device to start developing your passion for flying with.

The Ryze Tello is more of a toy quadcopter but that doesn’t mean it won't’ perform. It comes with a Bluetooth remote and you can use your smartphone to control it as well. You won’t get anything fancy like return to home features but that’s to be expected with this price. If that’s an important feature for you then you will need to spend a few hundred more to get it

This is a fun little toy that will show you the fun that’s possible with drones. You’ll be able to capture video, albeit not the best quality, but it can teach you about drones and will still be a whole lot more fun than any top copter you’ve ever played with. For around $100, this is great value, and certainly our pick for the best budget-friendly drone. 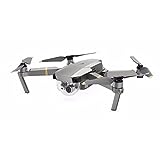 Our absolute top choice, of course, comes from the masters, DJI, but this time it’s their Mavic Pro Platinum. This is pretty reasonably priced for a drone of its stature and you can get one for yourself for around $1,000. Some might find this pricey but when you want your toys to be the best, you’ll have no issues paying for the experience.

The DJI Mavic Pro Platinum is a compact little device and it folds down to make it even smaller. You’ll have plenty of automated flight options to take the pressure off you as a pilot and it can even avoid obstacles that are in the front of it, which means you don’t have to.

Be prepared to perform frequent updates of the firmware and you’ll have to supply your own tablet or smartphone to control it. However, if you’re someone who wants to take aerial images or use their drone for professional video and recreational use, this is the best choice. It has crisp 4K video, 12MP raw and video stills, and a whopping 28 minutes of fly time per charge. There’s no better option for those who want to take their drone flying to the next level.

The Gadget Of The Future

If you think back 20 years ago, the idea of having quadcopters flying around for our personal enjoyment sounds like something too futuristic to conceive of. However, these drones here have proven that the technology is here and ready to be used, whether it’s for fun or business.

As you can see with our findings, there’s no shortage of options out there, even for those who can only afford the cheapest. Once you get your hands on a drone control and see what they're capable of, you’ll be no doubt saving your pennies to get something more serious.

Drones are costly, and like any new gadget, we can expect the price of them to drop over the years as the technology becomes more available and the models become easier to make. However, when you see what a drone is capable of both for fun and business, you’ll see why the money is well worth it.