There are so many animals on this planet, that scientists can’t even count them.  The estimates fall somewhere between 3 and 30 million species, but even these numbers aren’t certain. Naturally, there are creatures that we have never heard of in our lives. Of course, the list of species also includes cnidarians, sponges, Platyhelminthes, nematodes, and many others, that we are not very interested in. We would, however, love to know more about lesser known vertebrate species of animals. Here are 10 animals that you probably never knew existed:

If a wolf and fox would mate, the result would probably be the Dhole. This canid, native to South & Southeast Asia, is an extremely social animal. The Dholes live, and hunt in packs, exactly like wolves. They will occasionally split up, in smaller groups, to hunt their favorite prey: the medium-sized ungulates. The Dhole hunts by tiring its prey in long chases, and then disembowels it. Although they are considered timid animals, the Dholes are known to attack large animals such as wild boars, water buffalos, and even tigers.

Here’s a strange animal that you have probably never heard of: the Okapi. In spite of its zebra-like stripes, it is more closely related to giraffes. Appearance-wise it has a head similar to that of a hyena, legs of a giraffe and stripes of a zebra. The animal is native to the Democratic Republic of Congo.

This bright blue fish can be found in the Atlantic Ocean (assuming that you can distinguish it through the waves). If you ignore its derp-like face you can actually say it’s beautiful, especially thanks to its bright colors). The Blue Parrotfish spends 80% of its time searching for food.

The Fossa is the largest cat-like mammalian carnivore on the Madagascar Island. Size-wise it is comparable to the cougar. It has all the qualities of a feline: semi-retractable claws, flexible ankles and an uncanny ability to climb on trees head-first.

This animal is also known as the Waller’s gazelle, and it has a very unusual appearance: a long-neck that helps it eat dry horn brush scrubs easier. Gerenuk actually means giraffe-necked in the Somali language. This gazelle species has a small head with large ears and eyes. Its main advantage over other grass-eating mammals on the Savannah is its ability to stand erect on its rear legs and stretching its neck to reach trees and prickly bushes.

This wolf is the largest of its kind in South America. Like the Dhole, it is surprisingly similar to a fox (due to its reddish fur). This animal enjoys grasslands, bushes and the trees of South America. Its long legs are most likely an adaptation to the tall grasslands of its habitat.

The Bush Viper is a carnivore predator which inhabits the tropical forests of Africa. It usually hunts at night. It has beautiful lemon and dark-blue colored scales.

This little guy is also known as the blue dragon, and it is a species of blue sea slug. It prefers floating on the surface of oceanic waters because of its gas-filled sack in the stomach. 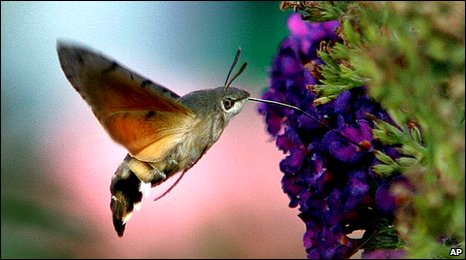 Next time you think you’ve seen a Hummingbird make sure it’s the real deal. The Hummingbird Hawk-moth looks extremely similar to the hummingbird, it makes similar sounds and it also feeds on flowers.

Number one on our list of animals that you probably never knew existed is the Sunda Colugo. This cute little fellow is also known under the name of The Sunda Flying Lemur (it doesn’t actually fly). It does, however, make giant leaps between trees. It is active only at night, and feeds on soft plant parts like fruit, flowers and leaves. It can be found in Thailand, Singapore, Malaysia and other places in Southeast Asia.