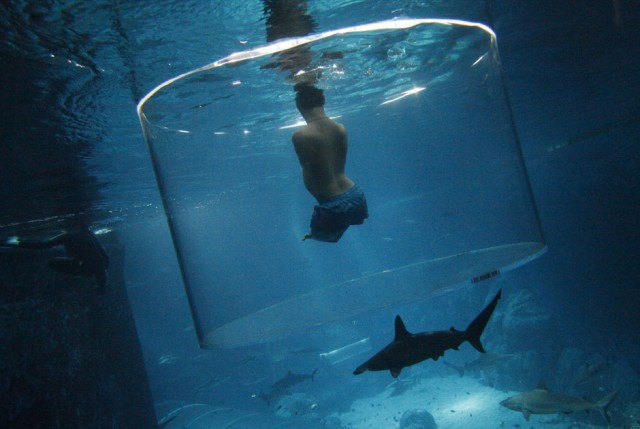 An American’s perception of the rest of the world, and indeed their own mighty nation, is a naive thing indeed. So says The World According to Americans, a comically altered map of the globe. On the evidence presented here, every country and every sea and every continent on the face of this here Earth can best be summed up with a simple cultural stereotype, vague and harsh and uninformed as it may be. The U.S. lives in the civilised world, of course. Their upstairs neighbours, they’re vegetarians. Those folks over there in Eastern Europe, they’re all commies. Africa? They’ve got AIDS. Oh, and above them? Fucking desert, dude!

The World According to Americans is designed by Bulgarian artist Yanko Tsvetkov, aka the alphadesigner. It is part of his satirical Mapping Stereotypes project, which sees him mapping out the globe with side-splitting cultural stereotypes taken from the perspectives of various different nations. You can see the rest of Mapping Stereotypes here, but I think most will agree this is the best, and funniest, entry in a tremendously hilarious project.

Check out more images from The World According to Americans below. END_OF_DOCUMENT_TOKEN_TO_BE_REPLACED

Most people associate world globes with geography classes or boring teachers’ offices. We have pop culture to thank for that. In 80’s and 90’s TV shows, globes could be found lurking in the corners of many a fictitious teacher’s office–far more than actually existed in reality. But globes are no longer as boring as they used to be thanks to artist Wendy Gold. Wendy runs a company called ImagineNationsTM where she makes vintage globes of all varieties.